The capital of Finnish Lapland, Rovaniemi city, is internationally known as Santa’s hometown, and it is one of the most popular tourist attractions in Finland. It is also an active city close to nature, offering a wide variety of services and events.

One of the most important, if not the most important, element of the city are its residents. Everyone has their own story, and every person sees their hometown from a slightly different point of view. Based on this story of diversity and variety of opportunities, the City of Rovaniemi has started to produce a video called “Ode to Rovaniemi”.

The video combines visual expression with music and a soundscape inspired by the heartbeat of the town, the nature, the architecture, the people and the scenery. The aim is to make “Ode to Rovaniemi” a work that looks and feels like the city residents, and it will be filmed during all seasons. The filming of “Ode” will continue until the late spring of 2018.

“We have the pleasure to present Rovaniemi to all visitors coming to the city and bring an image of Rovaniemi to different kinds of international events abroad.  This time, we do not just want to bring pictures of beautiful scenery, we want to show the vibrant Rovaniemi spirit through the people of Rovaniemi – naturally, without forgetting our most important attractions and the magnificent nature during the different seasons,” says Tuula Rintala-Gardin, Director of International Relations.

Flatlight Creative House from Rovaniemi is responsible for the design and visual implementation of the work, and the music and soundscape are produced by Janne Airaksinen.

The completed work will be used in the city's marketing both in Finland as well as in international events. The aim is to present Rovaniemi and its residents as genuine, relatable and inspiring – just as the creators see the city and the kind of an ode it deserves.

Now the city and the creators offer the residents an opportunity to participate in creating the ode: the city residents themselves can give tips and make suggestions about inspiring people and places that genuinely convey the feeling and essence of their hometown. More detailed information about the persons and locations being sought can be found via the channels of the City of Rovaniemi, or you can send e-mail to the production team at ode@flatlight.fi

The first taste of the style and feel of “Ode to Rovaniemi” is published on the City’s Facebook page and on YouTube. 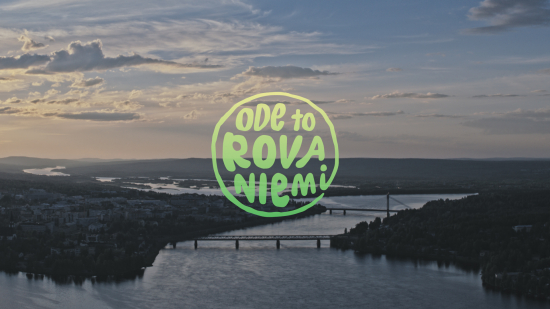