SHAMS was established with a view to honour researchers from every part of the world who tirelessly pursue distinctive medical research that serves the larger interest of humanity. A total of ten winners across the various categories of the award; international, regional and local, were honoured at the ceremony. The winners were recognised for their extraordinary contributions to medicine and healthcare, worldwide. The Award ceremony concluded with a glittering display of the winners on the façade of the Burj Khalifa, the world’s tallest building.

The official announcement was made at a virtually held event ceremony, in line with the UAE`s commitment to maintain social distancing to limit the spread of the COVID-19 virus. The topic of the Grand Hamdan International Award was Artificial Intelligence in Healthcare. Professor Bradley Nelson is the latest recipient of the Grand Hamdan International Award for ‘fostering a new generation of miniaturized components integrating polymers and microorganisms, paving the way to soft nanorobots capable of interacting with human tissues.’

Prof. Nelson is the Head of the Department of Mechanical and Process Engineering at ETH, the public research university in the city of Zürich, Switzerland, where he has been Professor of Robotics and Intelligent Systems since 2002. His research focuses on micro robotics and nanorobotics, highlighting its applications in biology and medicine. Prof. Nelson’s selection for the award acknowledges his remarkable contribution to intelligent systems for medical nanorobotics, specifically his leading role in the transition from rigid nanostructures to soft, flexible architectures, inspired by the dynamics of biological microorganisms. 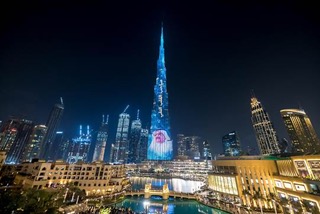 The Sheikh Hamdan Bin Rashid Al Maktoum Award for Medical Sciences is one of the most outstanding awards from the GCC countries, and has consistently acted as a motivating force towards promoting the medical services by honouring the scientists and the distinct working parties in academic and therapeutic scopes alongside medical and humanitarian services all over the world.

The Award clearly recognizes the importance of scientific research in boosting the progress of UAE, and plays a proactive role in funding domestic health researches through a pioneering program. The Award has proved to be widely successful, as it has been recognized by international observers and was testified by leading researchers vying for the award. This success reflects on the foundation’s international reputation and its high scientific credibility and level of performance.